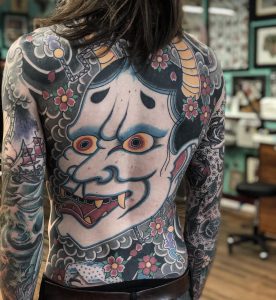 Japanese tattooing has a multitude of levels to it, so much so that one article could never properly touch on the cultural and personal significance of the country’s tattooing particulars. One could try, but what does one Scottish writer really have to contribute to a discussion on one of the most intricate and striking tattooing styles around? The answer is a little bit, and it’s regarding the hannya mask.

As a fan for many, many years – even the years before I was legally allowed to be tattooed – hannya tattoos always struck me as the most intimidating, upfront kind of tattoo someone could possibly get.

Whether they were huge, dark and daunting or palm-sized and drenched in vibrant colours, hannya masks always caught my eye. Now as an adult with a more refined appreciation of all kinds of tattoo art, they are still one of the most pleasing motifs that anyone can tattoo, but there’s a lot more to them than just being scary. Who knew? 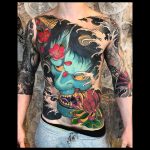 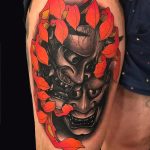 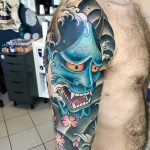 Originating in Japanese theatre in the 14th century, the hannya mask was used to represent vengeful female spirits. It’s double horns, striking eyes and distressing mouth used to represent the transformation from human to demon, the mask is viewed different face on as it when downturned slightly. The three variations of the mask (shiro, aka, and kuro) represent the gradual transformation from human to demon, as the masks become darker, more demonic looking, and ultimately inhuman – the progression from white and almost smiling to dark red, with disheveled hair a focal point of the style of theatre from which it came from. 700 years later, the hannya mask has come to take on spiritual and good luck meanings, as well as still being representative of Japanese theatre traditions. Some people wear it to ward off the evil spirit it represents, others may wear it to pay tribute to the captivating lore behind the mask itself. It’s not to be confused with the oni mask, however, as that’s another article waiting to be written. 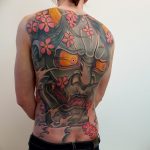 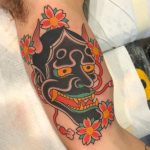 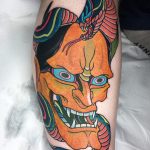 Like many traditional Japanese tattoo motifs, the hannya mask has been contorted and morphed into just about every tattoo style you can think of, but the boldest hannya tattoos are done in the old manner; big bulging eyes, thick outlines, well packed vibrant colours and that instantly recognisable curled grimace. While people wear them on their skin for various reasons, the visual impact of a great hannya tattoo is universal. 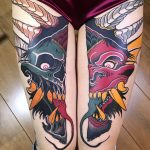 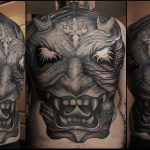 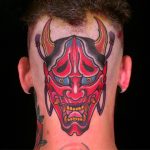 As beautiful and striking as the tattoo may be, it’s still a frightening image. What may surprise many who wear one of these tattoos, is that the image is inherently feminine. Some of the biggest, scariest looking tattooed males walking around with evil looking hannya masks may not be aware of the traditions and story behind it. That’s not to say that it’s a tattoo motif that shouldn’t be worn by males. Everyone has their own reason for choosing the ink they wear, after all. The hannya mask can be adapted anyway to fit the personality of its owner.

We’ve pulled together some of the finest examples of hannya tattoos from all around the world. As vast as Japanese tattooing is, this one design really stands out among the rest. These fantastically executed tattoos bring history to the present day, thanks to the wonders of modern tattooing techniques and technology. 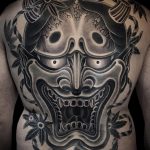 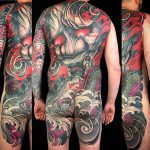 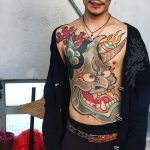 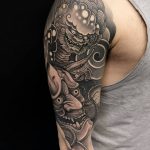 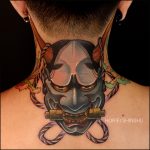 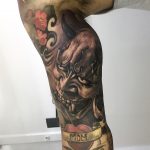