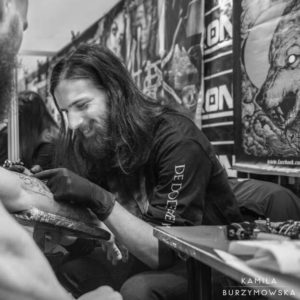 Tell me, how did you become known as ‘Grindesign’? Is there a particular backstory to the name?

Well, it’s kinda funny and childish story. Back in time, just like now I was really into grind core and all kind of extreme music in general. So I was like, hey-let’s choose a gruesome and brutal name but I ended up choosing simply grind design.

I liked it, but i was like lets use it with a silent D so it’s just GRINDESIGN. Loads of people already asked if its GRIND or GRIN. Well both make sense, so I do not really mind how people call “me”. Which is frustrating sometimes, that people still think that I’m not one person, but a group of creative people and the studio’s name is grin design hehe. Which is a compliment also in some way.

You are an illustrator at heart, what drew (pun intended) you to tattoos and work did you do before you became a tattooist?

Illustration will always have a really special place in my heart. I was studying animation at the uni, but after I had gotten my degree I was like, fuck I’m not even fascinated anymore with the whole animation thing. It’s wonderful and I don’t regret it for any second studying it, but I had much more pleasure in adding details and focusing onto a still picture, than when I did making it alive. Which as we know sometimes takes ages haha.

After I started to focus onto illustrations and got familiar with different (mostly digital) techniques and I enjoyed it a lot and it seemed people do as well. I ended up working for a lot of bands from allover the world. Now as we speak I would say tattooing is my numero uno love, but alongside illustration! For me it’s such an obvious match and i love it.

Before opening your own studio ROOKLET INK, you worked at the amazing DARK ART TATTOO, how was your time there? 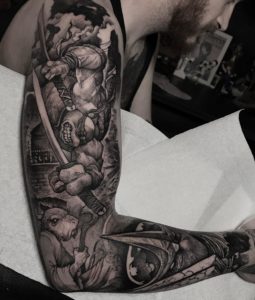 Dark Art is such an incredible and unique place. Their knowledge and crazy amount of skill there is more than inspiring.
I will never be able to showcase how grateful I am for those guys!

They helped me in every aspect. Showed me the basics and more of tattooing, networking, conventions- well everything what are the most important parts of this craft.
We still hang out from time to time and I would say with some of my ex coworkers from there we became really good friends!

Aside from tattooing, what are your other interests – I know at one point you had a band?

Haha, yeah The Sharon Tate. Such an incredible 4 years of my life, but when I quit the band I started tattooing, so for me that was like a creative resurrection to be honest. After 5 years I got to the point where I started to really miss playing drums and writing songs, but not under the name TST anymore. That was a nice chapter-but end of that story.

People change, I do change- a lot actually haha, so my approach to music is completely different now. I would say more mature, but that’s bullshit hehe.

Is there anything or anyone who you take inspiration from? 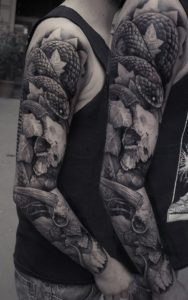 I think the whole world we live in is so inspiring. I do not have a lot of time for just taking care about my own inner peace and stuff, but when I go for a proper walk with my dog I try not to deal with my phone and emails. These dog walks are the best!

We live in a super peaceful district in Budapest, where you have a lot of opportunities to have switch off from your brain and just wander next to a nice little lake. Especially now, the weather is super nice so we spend sometimes hours out there. These are the moments when I find a lot of super nice things in nature. Different textures-bones, shrooms, every kind of leafs, branches.

I also try to catch up sometimes with comic books or just rereading old ones I love. My all time fav is Spawn, especially which has been drawn by Todd McFarlane. He is my hero haha, and Alfonz Mucha 🙂

Do you have any favourite tattoo artists?

I have a lot. But I try not to follow or at least check their work a lot. It’s so hard.. even without any purpose if you keep checking out a specific tattooer , sooner or later you will bite his style in a way.
That happened to me and I don’t like it when it happens haha.

At the moment I do appreciate a lot of oriental artists, Filip Leu of course, Shige, Chris Crooks, Elliott Wells – his stuff is fresh as fuck and such a lovely human being!
Just to mention some other favs of mine: Alexander Grim, Lukasz Sokolowski, Jeff Gogue. 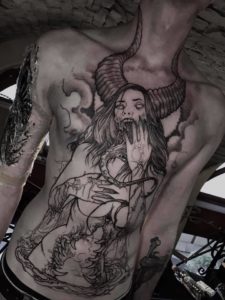 If you could describe your work in one word, what would it be?

You have a very distinctive style, probably the most distinctive out of any artist in your style – at least in my opinion. What is it about your style that you make so unique?

It’s always an inconvenient question. Lots of people tell me this, but I never really see my stuff as unique or distinctive. Actually that’s my constant struggle, to make it more unique and outstanding. But I don’t think I’m the only one with this problem hehe.

I use some returning elements almost in every piece I do and maybe some people noticed those. Also the way how I take photos-showcase my stuff is probably pretty recognizable. But once again every day I try to achieve something new with my pieces. 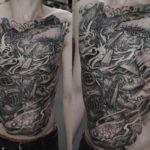 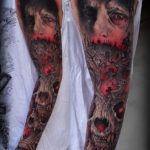 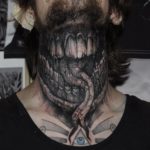 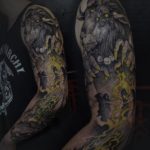 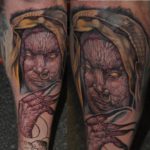 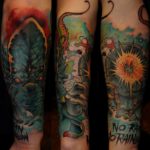 Do you have a particular favourite tattoo that you have done?

Hard to choose! I have some fav ones, but I do not have one specific favourite.

Is there anything that you would love to tattoo more of?

I remember reading somewhere that you like to switch between coil and rotary machines, is there a particular reason for this?

Absolutely! I love how fast and effective the coils are for linework. Especially for larger needle groupings when I have to use super bold lines with large scale compositions.
Coils are just simply awesome to make dot work and small details. Also I tend to work quicker with them when it comes to grey wash shading, The healing is also better and the end result is always solid. I mean as far as i’m able to check my healed work they still look solid, even though I’m not tattooing for a long time. 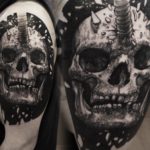 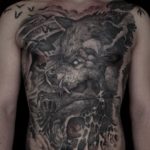 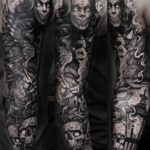 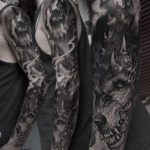 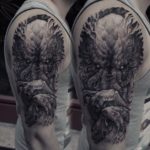 What has been your strangest tattoo request?

Maybe the sparrow headed priest with a bible in its hands – that was based on the dream of my customer. It was weird as fuck 😀

How long is your wait list and what would be the best way of getting a tattoo from yourself? 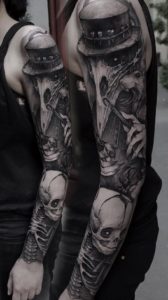 At the moment i’m fully booked for the next couple of years. I do not really plan to open my bookings for a while again. I only write a waiting list with selected ideas I would love to do. Also you may noticed, that in the past couple of months I’ve tried to focus mainly on large scale work even more. I have to learn loads of stuff in regards to compositions and tattoos which flow with your entire body. I think this is the hardest and one of the most beautiful part of this craft!

Finally, what do the next few years hold for you?

Who knows haha…I have some plans, mostly to travel overseas and visit a lot of countries I’ve always wanted to check out. Also next year we will have our wedding with my fiancé! Finally after 9 years hehe. She’s my partner in crime and such an inspiring human being! Without her we would not be able to talk about all these awesome things like Rooklet and tattooing which is an amazing part of my life!:)

Oh, Congratulations! Thank you very much for your time Robert, it was greatly appreciated. All the best with your wedding.