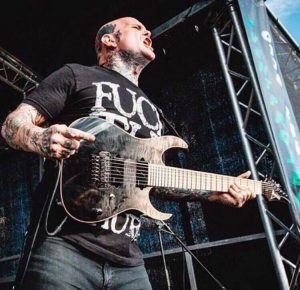 Hey Patrick, for the benefit of those at home, could you give us a few quick sentences about yourself – the Cliff notes, if you will.
I guess I’m a 42 year old musician, tattoo artist, husband, and father from the United States. I play in a band called Fit For An Autopsy and I’ve been playing music since high school in 1994. I’ve been tattooing for about eleven years or so. Tattoo wise, I primarily do American traditional designs. Real straightforward tattooing

Excellent man! I believe you’ve been working at Artisanal in New Jersey most recently?
I work at Artisanal when I’m back visiting in New Jersey, yeah. When I’m in Atlanta, where I currently live, I now work at 1920 Tattoo in Helen, Georgia.

I saw that you held a tattoo day for an animal shelter, was that at Southern Star?
Actually, that was another shop called Mothership Tattoo. Once a year they do a benefit for a local animal shelter. All the proceeds go to benefit the shelter, so we went up and tattooed for a whole day there at the shop. 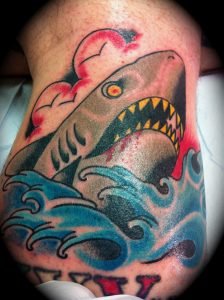 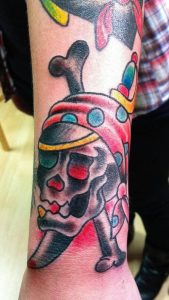 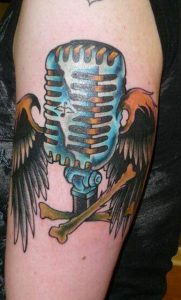 That’s such a great event! I think I’m not wrong in thinking that these kind of charitable actions are a big part of your life?
Absolutely, yeah. You know, I’m not vegan. I don’t fall into that lifestyle, but I do feel like a lot of people overlook the mistreatment of animals, on a broad scale. One thing I try and do as much as I can is donate to or help shelters and animal rescues. I have four dogs and all four are shelter dogs. I’ve worked with different rescues in the past, but mainly pitbull rescues as I feel in the States they are a very abused and overlooked breed of dog. My band also tries to reach out and help not only animal charities but a whole handful of others too. We did a limited shirt to benefit the Syrian refugee crisis where all of the proceeds were donated to a charity that created shelter and gave food and clothing to families that had been displaced by that conflict. Most recently, we brought out a shirt and CD release to assist a group of Native American folks that are going through a very rough time with the government and a whole bunch of business policies – the access pipeline that they’re trying to run through the Standing Rock reserve in Dakota. We donated a bunch of money to try and help and released a video for “Black Mammoth” (from 2017’s The Great Collapse – Matt), to raise awareness. It’s something that we feel strongly about. If you have a platform, you should use it for something good. Fit For An Autopsy are lucky enough to have some kind of platform where we can reach people and talk about the things we care about. When we can give back we do the best we can. We don’t make a million dollars but we always try to pay it forward.

I love that about FFAA and I think many more do too. I feel like that you carry that attitude everywhere in life, to be honest. Be it in music, your tattooing or even your very public quest to get in better shape, you have that confidence in yourself to put your all into whatever you’re doing. If you were going to give advice to a young musician or tattoo apprentice on how to find and harness that confidence, where would you start?
Number one. Whether it’s music or tattooing or any kind of trade. You always have to look to the past. You have to look to the guys that did it before you and pay attention to the people who have established what it is you do. It’s very important to be aware of where your style comes from as a tattooer. The things that you like – say you like traditional tattoos like me, you wanna look at the people who are doing it best. So you say, okay, who did they learn from? Who did they look at? There’s a lineage that comes with all that. If you’re gonna be an apprentice, no matter what style you do or what kind of tattooing, what kind of machines you like, it doesn’t matter. You have to look back at the people who established what you do. If you’re a portrait artist, look for the best portraits. Black and grey fan? Do some homework on the guys who established the black and grey style. There’s the lineage. Always look to your past and that applies in music too. Maybe you like a heavy, slam death metal band, now, where did they come from? You have to look back at Suffocation and Obituary, maybe bands that came before that in the late 80’s and early 90’s bands that helped establish the style. I’m learning about these things every day. That’s the most important thing. If you can establish yourself in the roots of something and learn the basic steps in the beginning, you’ll be able to flourish as an artist or musician, because you’ll have that solid ground to build on. 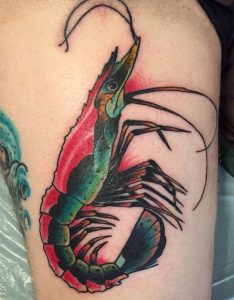 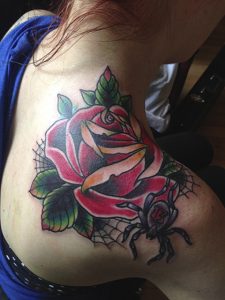 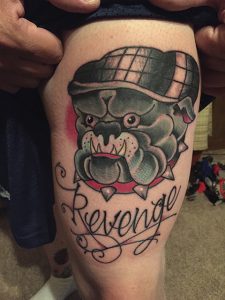 As you’ve said, you’re a husband and a father as well as a tattoo artist and touring musician. Where do you find the balance between being permanently on the road or sitting in a studio for hours – where do you find the time to fit “Pat time” in?
Well I mean, I have a very supportive wife. If it wasn’t for her I wouldn’t be able to do any of the things I do. When we began life as a couple, I was tattooing seven days a week and doing my band as a part-time thing. I cut my tattooing to five days a week but then the band started to pick up. Then, in 2008, we got an offer from our first record label so we made that record and then the band started to get even busier. And then we had my son and I started touring. You can see there’s a progression, one where my wife has been unbelievably supportive. Because of her I’m able to sit back and do the things I need to do to keep my sanity. I’ll be honest with you, when I get home from tour all I wanna do is tattoo. Then when I’ve been tattooing for three months, all I wanna do is go on tour. There’s this love for tattooing and music – the reason I do tattoos is that I met people who did tattoos through music and I fell in love with it. Each one is lined up with the other, without one I don’t have the other. They are my two passions so it’s almost like I’m cheating while I’m doing one or the other. 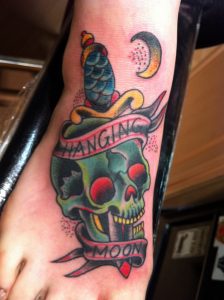 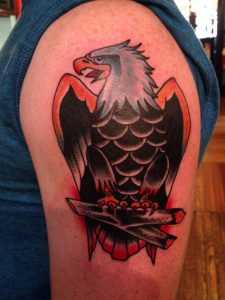 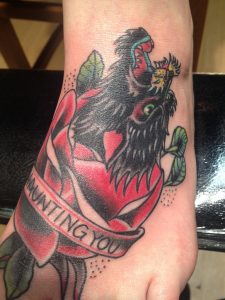 I think you’ll get away with a little bit of cheating in this case!
I’m trying really hard! Another thing is, and I hate to say it like this, but I was a full-time tattoo artist and now I’m almost a part-time tattooer, which I hate because it’s almost like a no-no in the industry – “you’re not allowed to do that”. Somehow or another, people I respect as tattoo artists see how much I care about both things and they let it slide. Thankfully, I work at a couple of really great shops with a bunch of really great artists and I’ve got lucky in that sense. As far as me being me, my whole life is my wife and my son, guitars and tattoo machines. I mean you come in my house and there’s tattoo books all over the place, paintings on the wall from my favourite tattoo artists, and then guitars and heavy metal and rock’n’roll CD’s everywhere. My whole life revolves around these things. As long as I’m doing one of these things I feel like I’m not cheating myself, but it’s hard to be away. I’ve been gone for seventy days from my wife and son at the end of this tour. When I’m home I tattoo for a couple of weeks and then I’m back out on tour doing a small headliner and a couple of US festivals, then home, then out again for for a few days and then some time off to write a new record.

The Great Collapse topped a whole bunch of end of year lists and I feel it’s the most complete Fit For An Autopsy record. So far anyway!
Thank you.

As you move forward with the band, what are your plans moving forward in tattooing? Would you like to guest spot abroad?
I mean, I would absolutely love to come tattoo in the UK. If anyone reading this is interested in getting tattooed by me or anything, please get in touch @prstattoo@gmail.com and we can work whatever out. I have five months off this summer, aside from one tour in August, but I’m off for that time. I would love to travel and tattoo as much as I could. I’d be more than happy to come to the UK and meet cool people and make cool tattoos. 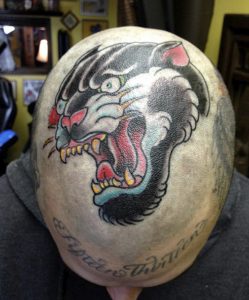 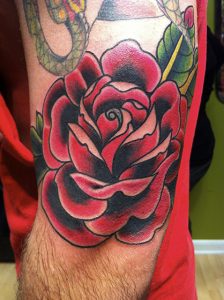 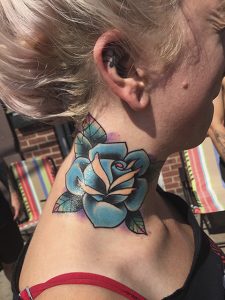 That would be sick, the UK would be lucky to have you over! Now, to close things off, now’s your chance to tell everyone who they should be listening to and getting tattoos from.
Yeah if you live in the North East you need to be paying attention to the guys in Kings Avenue tattoo – Mike Rubendall, Justin Weatherholtz, Matt Beckerich, Grez. They have one of the strongest teams in the North East and I’ve been tattooed there a bunch. Anywhere near Georgia, you need to check out Southern Star, Good Clean Fun and 1920 Tattoo. Obviously, if you’re in New Jersey you need to check out Artistanal in Somerville. As far as music goes, Great American Ghost is a hardcore band that I’m super jazzed on right now. Pay attention to them. Obviously the bands we’re on tour with – Goatwhore, Obscura and Sepultura. Three bands that are super good. Then there’s this band Yashira were bout to take out on tour with us.

Yashira are incredible, so glad you’re taking them out!
Yeah, they’re great. The new Harms Way record too, man there’s so much good stuff but I always have to go with my classics – Meshuggah, Gojira and Carcass. If you don’t know those names, pay attention! With the Internet there are no excuses now. Music or tattoos, any kind of culture, if you want to know something or find something, stick it in a search engine or social media, you can find it man. Don’t be lazy. Look for music, look for good tattoo artists and take the time to pay attention.