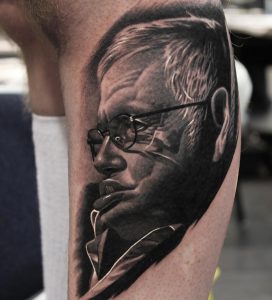 This March, the world said farewell to a great man, with a great mind. On the 300th anniversary of Galileo’s death and the 139th anniversary of one Albert Einstein, Stephen William Hawking passed away. A man who had been given just two years to live in 1963, Hawking dedicated his life to helping us understand our world and the worlds beyond it. His battle with motor neurone disease as inspiring as his efforts towards the betterment of our knowledge and understanding. A persevering genius.

It was 1988’s A Brief History Of Time that shone the public eye on Hawking. The book was full of dense scientific concepts but explained in a manner that had water coolers worldwide abuzz with talk of Big Bangs and black holes. From then on he became a beacon of hope for anyone facing conflict or adversity; his struggles echoing with disabled individuals especially – Hawking’s efforts towards improving the lives of the disabled were just a fraction of the charitable work he was involved in.

It makes sense that someone would want to commemorate the great man by tattooing his image onto their skin. People get portraits of their heroes, after all. In honour of the great man, we’ve put together a collection of some of the best Stephen Hawking tattoos around, these designs proving that his life’s work will never be forgotten. Even if you have no interest in science or the cosmos, Hawking lived to prove that anyone can overcome great difficulties and, as such, stands to remain as one of the world’s most celebrated survivors.

Hawking’s remains will be laid to rest alongside Isaac Newton and Charles Darwin. The great mind of our time belongs with other great minds of the ages. This is just one of many tributes made, and there will be countless more, but join us in remembering a mind that would not succumb to an ailing body and a human that always wanted the best for his fellow man. 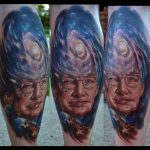 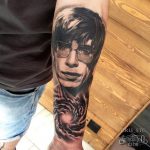 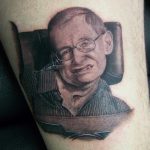 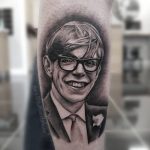 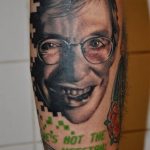 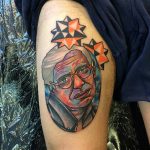 “…however difficult life may seem, there is always something you can do and succeed at. It matters that you don’t just give up.”